Skip to content
Previous Next
Contested Histories Onsite: The project has kicked off!

Contested Histories Onsite: The project has kicked off! 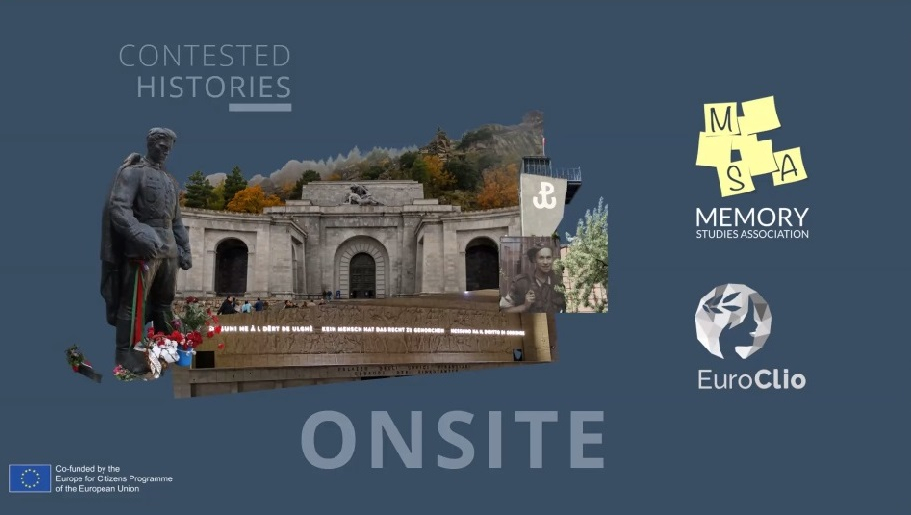 Wherever you go in Europe, you’ll be walking by statues and other landmarks that try to tell you something about the past. But the way in which these landmarks narrate the past don’t always match those in which we narrate the past ourselves. Tour guides, teachers and other history educators increasingly face audiences who dispute the historical narratives offered to them, particularly when it concerns Europe’s dark totalitarian past. Some of the criticism is rooted in political propaganda. However, others are grounded in justifiable critiques which tackle the singular narratives offered to citizens.

This is why the Memory Studies Association (MSA) and the European Association of History Educators (EuroClio) agreed that it is time to develop a project to help European citizens better understand complex and diverse legacies of Europe’s totalitarian past by presenting online academic lectures and tours at contested historical sites and developing toolkits on how to give self-reflective critical tours. Contested Histories Onsite aims to place Europeans in discussions and debates on multiple historical perspectives and to activate citizens in public involvement of memory-constructions. As part of the EU’s Europe for Citizens programme, the project’s aspiration is rooted in a shared conviction that raising critical questions about the past is fundamental for citizens to develop a critical attitude towards the narratives that are competing with each other in contemporary politics. Which historical narratives are dominating today’s European public space? How are they in conflict with one another? Which contemporary contexts have shaped these narratives? And which narratives are often overseen?

A core team of educators and scholars will work together with EuroClio and MSA to develop tours for citizens and create toolkits to improve such tours. Five sites have been chosen on the basis of addressing Europe’s complex totalitarian past: The Warsaw Uprising Museum in Warsaw (PL), the Statue of the Bronze Soldier in Tallinn (EE), the Mussolini Bas-Relief in Bolzano (IT) and the Valley of the Fallen in Madrid (ES). Prior to each tour, a public lecture will be held to give historical and contemporary context to the sites. Moreover, a podcast will be developed in which each episode is dedicated to one of the tours, informed by lectures, tour contents and civil engagements.

On 9 March, EuroClio and MSA had a successful Kick-Off Meeting for Contested Histories Onsite. This event included not only a detailed blueprint for the upcoming tour events, but also served as a first meeting to exchange experience on the topic of memory and historical sites. Aline Sierp, Grace Sahota, Steven Stegers, Marie-Louise Jansen and Olivia Durand took the lead in sharing their experience with organising educational tours and contested histories, emphasising the importance of engaging European citizens in discussing pluralism, civic rights and democratic practices.

For now, Contested Histories Onsite will keep you updated on the upcoming events. The first activity will take place in Warsaw (PL) during the MSA’s 5th Annual Conference. The tour will focus on the Warsaw Uprising Museum, chosen for its representation of warring regional nationalist movements that serve to deepen the understanding of the violent context of the Second World War’s Eastern Front.

This project is organised by MSA and EuroClio as part of the Europe For Citizens programme, funded by the European Commission’s Education, Audiovisual and Culture Executive Agency. More information can be found here.

We use cookies on our website to give you the most relevant experience by remembering your preferences and repeat visits. By clicking “Accept All”, you consent to the use of ALL the cookies. However, you may visit "Cookie Settings" to provide a controlled consent.
Cookie SettingsAccept All
Manage consent

This website uses cookies to improve your experience while you navigate through the website. Out of these, the cookies that are categorized as necessary are stored on your browser as they are essential for the working of basic functionalities of the website. We also use third-party cookies that help us analyze and understand how you use this website. These cookies will be stored in your browser only with your consent. You also have the option to opt-out of these cookies. But opting out of some of these cookies may affect your browsing experience.
Necessary Always Enabled
Necessary cookies are absolutely essential for the website to function properly. This category only includes cookies that ensures basic functionalities and security features of the website. These cookies do not store any personal information.
Non-necessary
Any cookies that may not be particularly necessary for the website to function and is used specifically to collect user personal data via analytics, ads, other embedded contents are termed as non-necessary cookies. It is mandatory to procure user consent prior to running these cookies on your website.
SAVE & ACCEPT
Go to Top